I am making a list of trustworthy open source VoIP team chat software for use in 2019. Why? Proprietary software sometimes contains bugs and these can turn into worms easily like this. Cloud providers also sell off customer data especially when they are heavily funded by investors and purchased, a wise Redditor once said.

Among these 3, others have been here early on to focus on messaging/voice/video for example Let's Chat, IRC, Mumble, and Jitsi.

If you feel I am missing anything, please comment below and I will happily actively maintain this list with community feedback.

All of these are Discord alternatives but can't compete with teamspeak as there're no global or per group voice communication. Clients based on Electron are buggy and take too much resources.

For now the only active Open Source alternative for TS is Mumble.
Also there was VoiceChatter which was focused to be Ventrillo alternative.
Last edited: Jun 25, 2019

Teaspeak is also a good option, in my opinion.
The client is an open source based client with a native backend.
It is basically like teamspeak but with webclient and a built in Music Bot system.
( The project is not illegal as everybody thinks: https://forum.teaspeak.de/index.php?threads/what-kind-of-software-is-teaspeak.1551/ )
Last edited: Jun 25, 2019

yamanoo said:
The project is not illegal as everybody thinks
Click to expand...

The project is illegal despite claims of the software "being developed".

Is reverse engineering and using parts of a closed source application legal?

The developers are mostly from EU and TeamSpeak's headquarters is in the EU. This is a clear case of copyright infringement by reverse engineering the TeamSpeak 3 protocol and releasing a competing product. The mere fact their website even mentions avoiding TeamSpeak's fee charge for licensing, then asks users to pay for more features makes me 100% certain their project is illegal and harmful to the TeamSpeak company, they could possibly sue for damages or at least copyright infringement for their proprietary protocol being resold.

If they cared about the TeamSpeak community, they would open source the server to allow other awesome things like making a Mumble server that supports TeamSpeak clients also (if such a task is easily possible, I am guessing the Mumble server would have to pretend to allow up to 32 TS3 users or something).
Last edited: Jun 25, 2019

I think it really isnt illegal.
But i'll give it one more try and I'll research the subject better.

By using TeamSpeak, one agrees to their EULA.

While the EULA may not be legally binding, it is implied to not reverse engineer a proprietary protocol to make a competitive product (TeaSpeak is competitive to TeamSpeak, look at the name). There are all sorts of possible lawsuits here, from the name being too similar to the protocol being reversed for competitive and for-profit purposes.

In my opinion, releasing a server "crack" for educational purposes is safer than trying to remake TeamSpeak and then sell your own sorts of licensing. Look into copyright fair use.

It is highly risky to copy any code into a program you create as a result of reverse engineering, because that copy could infringe copyright unless it is a fair use under copyright law. Note that copying can include both imitation of non-functional elements as well as verbatim duplication.
Click to expand...

They have verbatim had to copy the TeamSpeak 3 protocol, no judge would look at TeaSpeak and TeamSpeak and say "Totally different." - their frontpage is incriminating in my opinion but to each their own. Here, we actually shut down DMCA notices (the responsible thing to do and how you stay out of trouble). I know for a fact they have been served notices and ignore them!

The fact TeamSpeak's legal team is not acting against TeaSpeak surprises me considering the name alone is a clear trademark violation for sounding too similar.

Here is how to report trademark and DMCA/copyright.

If TeamSpeak had any serious legal team, they would have already handled this. In my opinion, this is how we also know TeamSpeak 5 is probably going to suck, they are not even defending their software to keep their profits. I know many people have switched from paid TeamSpeak servers to TeaSpeak, where people using cracked software - these were people that typically could not afford a license in the first place. But what do I know?
Last edited: Jun 25, 2019

Yeah, i understand your point of view.
I do not really know how the entire teaspeak server build is but,
why TeamSpeak had explained their case against TeaSpeak as settled then?
and why is teaspeak project still alive? huuum..
i'm talking about using teaspeak server without using teamspeak client to connect it.
Teaclient + teaserver (thats what i think it is legal)
The name TeamSpeak isn't even a trademark xD
TeaSpeak is a standalone software and not for cracking the TS3 server or something like..
Like i said, i'll reserch better about this subject cause i do not believe it is illegal
if it is still growing day by day
Last edited: Jun 25, 2019

yamanoo said:
The name TeamSpeak isn't even a trademark xD
Click to expand...

Correct, they filed for the trademark https://register.dpma.de/DPMAregister/marke/register/3020090000107/DE and it was rejected.

So in fact, if the case were to somehow get involved with the EU then things could get interesting.

More than likely, TeamSpeak does not have the legal funds to initiate the case and they are only going to keep losing money.

Lets wait and see..
I'm using teamspeak (NPL and AAL) and teaspeak for now.
Mumble or Ventrilo are not in my options due to high traffic/resources consumption
when comparing it with teamspeak or teaspeak

How is stability on that anyway? It seems they are constantly combatting bugs/crashes/etc. I have heard from many people their server just stops working for random reasons, audio quality glitches for example with music bots, etc.

The problem with projects like these are they are typically developed by a small team of developers with access to their proprietary server project.

The second the owner becomes too busy, the project is dropped and the life reaches death. Splamy and WolverinDEV are really the main people that gave the project any sort of backbone, https://github.com/TeaSpeak with such a small dev team and seemingly amateur C++ development or whatever lang(s) being used (MANY bugs/crashes/etc)... I would never consider running Tea~ on any production server. If I get a chance to perform a full security audit on their platform, I am sure I could get RCE (remote code execution). If I have some extra time this weekend, I will take a look. I would say Splamy contributed the MOST to the project as he spent many months getting the custom client down...

btw, the TeaSpeak software is based 99% entirely on open source projects https://github.com/TeaSpeak/TeaSpeak/blob/master/default_files/install_music.sh for example just skim this. You will see ffmpeg, youtube-dl, etc. These are all open source projects. So the vast majority of what TeaSpeak is, I would say is using open source projects to complete their work. This reduces their lines of code by MANY MANY THOUSANDS. Then, they've reverse engineered (and stolen) TeamSpeak's protocol for the server, to make all this open source (free) software work..

You can pretend TeaSpeak is helping advance the TeamSpeak community but it is more parasitic than anything as they're switching people from one proprietary platform to another proprietary (and buggy as shit and also non-audited for security).

The second someone makes a TeaSpeak scanner, finds a 0-day, and.. every one running a TeaSpeak server gets infected I will not be able to help myself from laughing. Run cracked/illegal software, ge' hacked.
Last edited: Jun 25, 2019

Teaspeak it is more stable day by day.
(not really stable 1 year ago.. but now it is working as i expect..)
I'm just using 75mb ram with +-300 users inside my teaspeak server.

Yeah, small team, but always working and adding the features we want.. Imagine if they're more
(not like teamspeak team that i do not even heard about.. xD)

"...amateur C++ development or whatever lang(s) being used..."
I do not think so, but yes, you can always take a look at that.
Maybe you'll like the idea of using teaspeak software.

yamanoo said:
I do not think so, but yes, you can always take a look at that.
Click to expand...

They have no one with extensive security experience on their team from my knowledge.

They can use dll injection, disassemblers (e.g. IDA Pro/OllyDbg/Immunity) for debugging applications and reversing the processes to derive their own. Really not hard with a little bit of training, knowing some C++ and understanding some ASM. A great explanation is available over here on getting started: https://reverseengineering.stackexchange.com/a/12168 also reversing protocols can be done https://jhalon.github.io/reverse-engineering-protocols/ also definitely check
https://www.reddit.com/r/ReverseEngineering/comments/yru6p/_/c5yijpt
My point is that WolverinDEV is not doing anything super hard. He just has a shit load of time (many many months of work into this).

One of his first posts on this forum in 2017 was of him bragging about working on reversing the TS3 server - he also said "Hmm well god job man, but that isnt very impressive to inject a hook.": 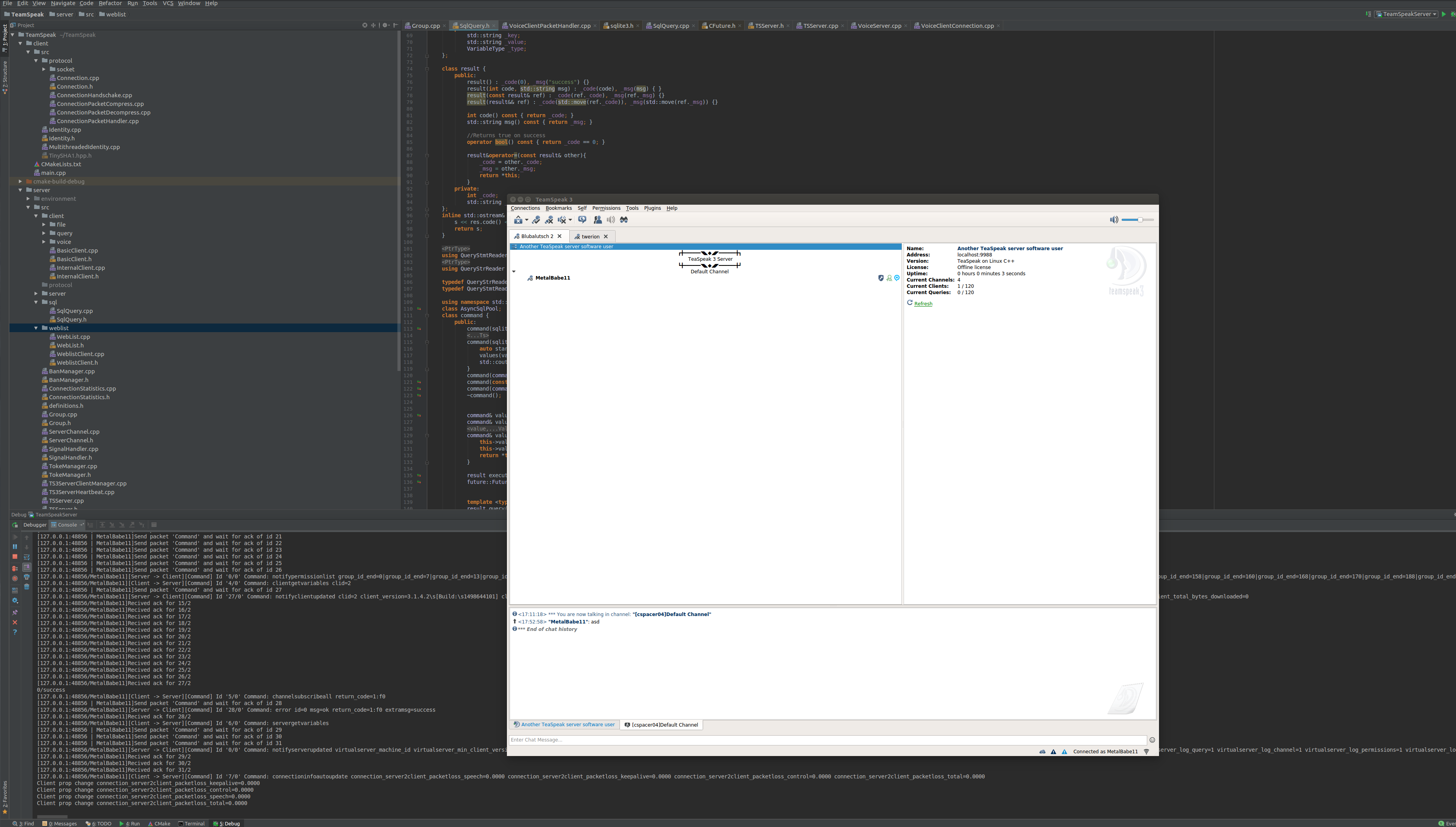 We initially offered to teamwork with him to help his project with our security team. Instead, he wanted to launch his own forum and have us advertise his project that he would then sell for money.

I do not support reverse engineering a proprietary protocol, to make another proprietary server with that same proprietary protocol. This makes about as much sense as - well nothing really. Open source ftw or gtfo, my $0.02.. a lot of limitations by withholding a possible TS3 bridge for free/research/interoperability reasons. Could also be a crypted backdoor in the server added any time.
Last edited: Jun 25, 2019
W